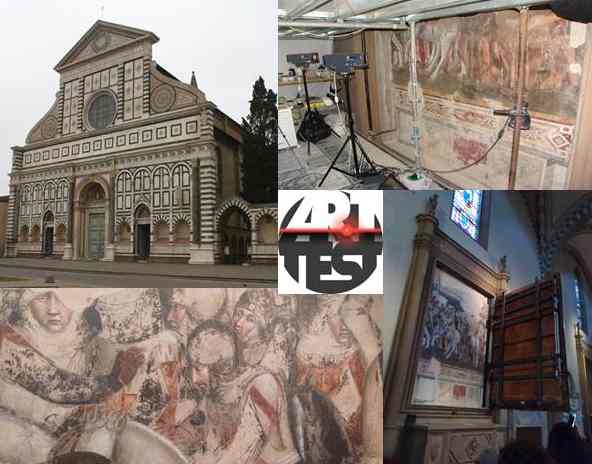 Under three of the paintings decorating the altars designed between 1565 and 1570 by Giorgio Vasari for Santa Maria Novella, a series of mural paintings were discovered – dating from the end of ‘200 to the beginning of’ 500. The altars were meant to beautify and modernize the Dominican church of Florence, however they only covered pre-existing frescos, belonging to the earliest phase of the church’s history, as it has been discovered on the occasion of a restoration campaign.
Last February 11, the results of the studies on this sensational discovery were presented together with the book “Research in Santa Maria Novella. The fresco of Bruno, Stefano and the others “, edited by Anna Bisceglia, superintendent of the Florentine cultural heritage and published by Mandragora.
Art-Test has been working on one of the three paintings uncovered on the walls of the church, i.e. the one attributed to Bruno di Giovanni, brother of Buffalmacco, depicting San Maurizio captain of the Theban Legion, along with the other martyrs, in a frenzied scene of deep intensity. The martyrs expressions reveal that they know that they are going to die, since they refuse to kill their Christian brethren.
Multispectral images have been acquired in the visible range, in IR reflectography and in UV fluorescence. Such results with XRF investigations, and photomicrographs, determined that the paint is for the largest part, not applied using the frescos technique, but it is a dry painting, that in IR shows an underdrawing. Moreover, on the surface, residues of adhesives have been found, intended for the application of a metallic sheet, especially on the helmets and the armours. The scene on the wall vibrated with the church lighting, with an illusionistic effect that today we can only imagine. (Or a virtual reconstruction could be produced and visualized on the website of Opera Santa Maria Novella, what do you think?)
Tweet