On show this summer in Florence the monographic exhibition “Piero di Cosimo eccentric painter between Renaissance and Mannerism” (Uffizi, until 27/9), following the one recently concluded at National Gallery of Art in Washington.
Lent to Washington and now worth a visit in Florence, among others the extraordinary “Liberation of Andromeda“, as according to Vasari: “Piero never made a lovelier or more highly finished picture than this one“, (diagnostics by Art-Test, not yet published)

In the Florentine exhibition, paintings and drawings by Piero relate with works by artists such as Filippino Lippi, Fra Bartolomeo and Lorenzo di Credi, to highlight how the pupil di Cosimo stands out as an original painter, whose style was said to be more Flemish (or Venetian), rather than Florentine, as his paintings were more relying on color values ​​rather than on the preparatory drawing. But is this what emerges from the investigation?

A solitary painter, he was however greatly demanded by the most prominent families of Florence (including Strozzi, Capponi, Vespucci). He was an experimenter, one of the firsts, along with Leonardo, adopting the oil painting technique. The studies conducted byE. Walmsley reveal, in fact, how Piero was also eccentric in the way he was making use of his tools, with overlapping and peculiar brushstrokes and sometimes also of fingertips. It was in fact just uncovering the use of such a particular way of working that helped to solve several cases of dubious attributions.

Attempting new ways, away from the established traditional ones, however, could also be the cause of the difficult state of conservation faced by several of his works.

For example, the great altarpiece “Mystic Marriage of St. Catherine and Saints“, alongside the high quality of the original painting, revealed also significant losses under the multiple layers of repainting (diagnostic analyses by Art-Test, not yet published). This masterpiece was unexpectedly found, resurfacing in the antiquarian market, in a private collection. On special loan for the exhibition, you can now admire it during the challenging phases of restoration. Such a unique opportunity should also not be missed!

The top part of the altarpiece was missing, but a befitting fragment displaying two angels distributing incense and jointly carrying a crown, listed as “style of Piero di Cosimo” was identified at the National Gallery in Edinburgh. When it came to Florence to undergo the necessary conservation treatments, the examinations revealed on the altarpiece, concealed by overpainting and restoration, the feet of the angels of the top. The testing (performed by Art-Test, still to be published) left no doubt! The repainting has been removed and the two parts are now joined for the display. So the angels got their feet again, but only temporarily, since after the exhibition they will be separated by over 1700 km again! 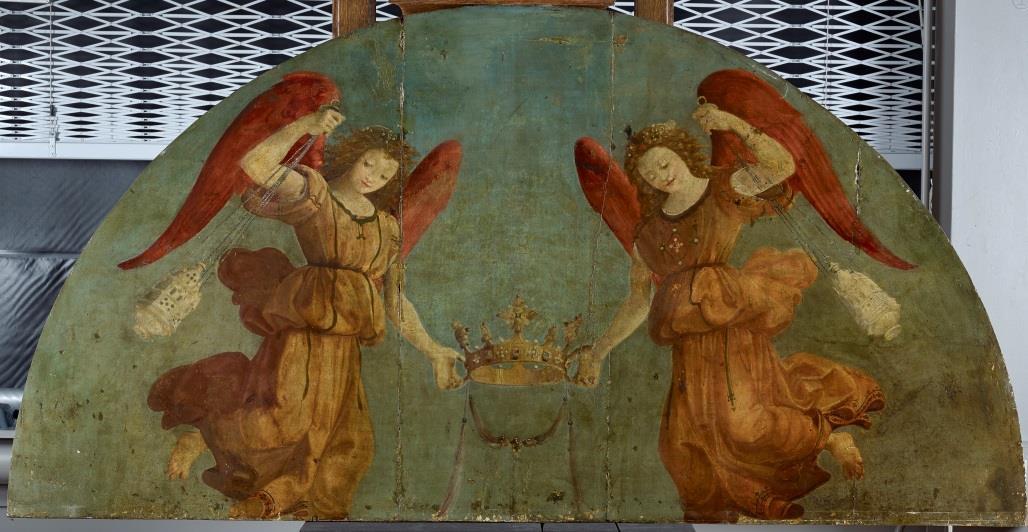 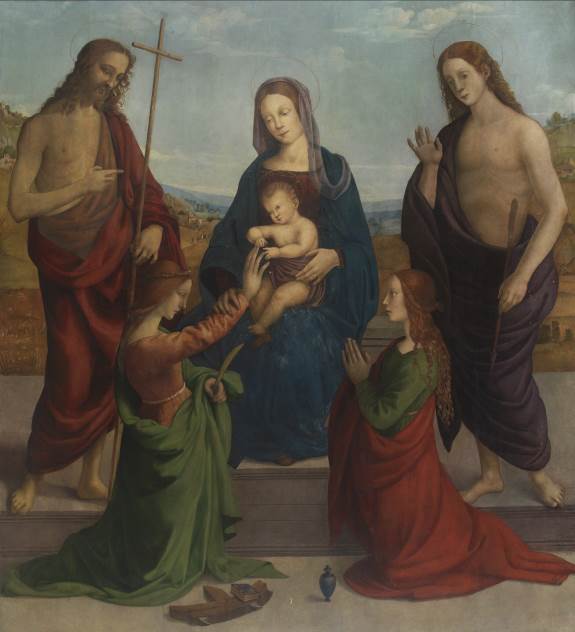 “Mystic Marriage of St. Catherine”, before restoration, Piero di Cosimo, private collection; currently on display at the Florentine exhibition in the course of the conservation treatment