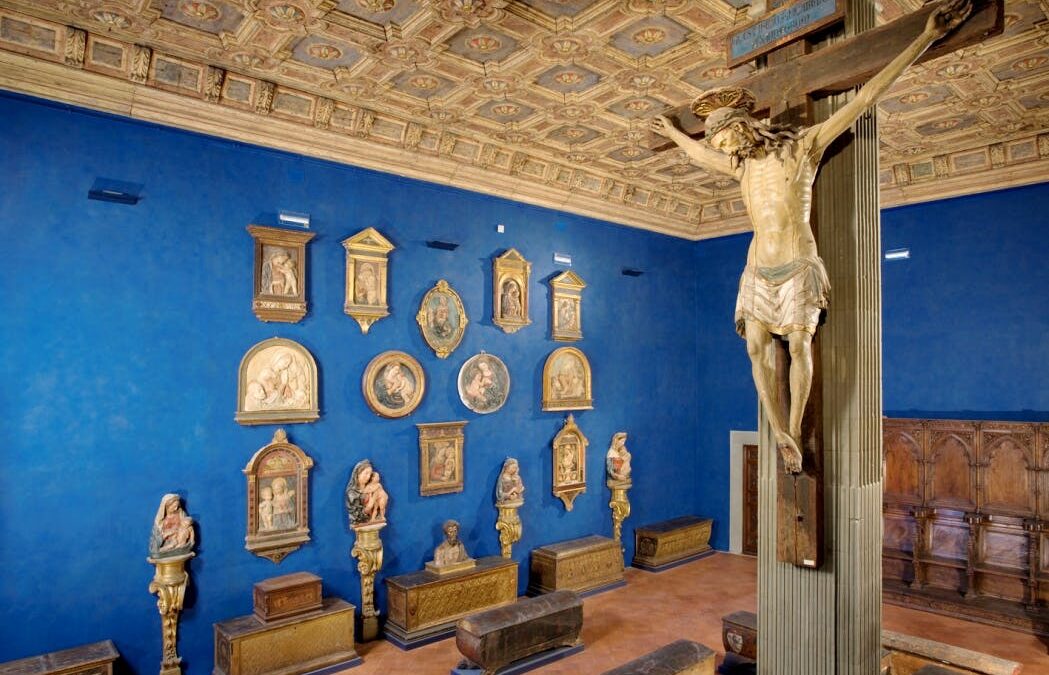 Precisely in these days, in which Florence has celebrated antiques at their highest level in the Biennale hosted at Palazzo Corsini, we like to remember that just 100 years ago, on 12 September 1922, in Florence died Stefano Bardini (1836-1922), who can rightly be called the inventor of the modern antiques market.

Stefano Bardini, who had built a small empire in the city on the Arno, with his show-room building in Piazza dei Mozzi and immediately above his beautiful villa with a fabulous garden, was not exactly loved by his fellow citizens (he was in fact born in Pieve Santo Stefano in the province of Arezzo), indeed, they just couldn’t stand it, so much so that they gave it the poisonous nickname of “king of rubble”. So, when he died, malicious reconstructions about his fantastic career began to appear in the newspapers, beginning to sow doubts about his honesty, so much so that then these shadows remained on his name for a very long time.

In reality Stefano Bardini is a true model of self-made man, admirable for his incredible talents and, why not, also for his acute cunning. At the age of eighteen, he moved to Florence to attend courses at the Academy of Fine Arts and thus pursue his dream of becoming a painter. It was the era of historical Romanticism, of painters such as Cesare Bezzuoli (who was his teacher) and Stefano Ussi, of their large paintings with a historical and above all “medieval” subject, and their studies were real armor deposits, antique furniture and furnishings that can be portrayed in the paintings in order to give more truth to their subjects. Perhaps it was in these studies that the young Stefano first encountered ancient objects, antiques, and was definitely struck by them. This was the time when the rediscovery of the Renaissance had already taken place, thanks to characters such as Elizabeth Barrett Browning and Robert Browning, George Eliot, John Ruskin, Vernon Lee, Percy Horne, who came to Florence and chose it as their homeland of choice. The first crafty antique dealers acquired at low prices (also given the great abundance) works by Botticelli, Beato Angelico, Donatello, Della Robbia, but also ceramics, furniture, furnishings, and the buyers were already the great international collectors such as for example the Rothschilds of Paris. Among other things, precisely because of the history of taste, it is very interesting to read in the pages of Alessandro Foresi, the most important antiquarian of that time, that the noble Florentine families freed themselves, for example, of the ancient ceramics of Gubbio or Deruta for to be able to buy the very fashionable ones of the Sevres Manufacture.

That is a brief outline of the environment in which the young Bardini, as a failed artist, moves his first steps turning to the world of antiquarian trade. How and when we do not know exactly, but the leap in quality was made between 1866, when he volunteered in the Third War of Independence, and 1877, when he became a very famous antique dealer. Surely he had the intuition of going beyond the narrow Florentine borders and opening up to wider horizons, for example by coming into contact with the Roman Castellani brothers, goldsmiths, collectors, antique dealers, patriots, also present in Florence, who opened wider horizons to Bardini. They probably introduced him to Wilhelm von Bode, his lifelong friend of raids, who was the assistant director of the Collection of Antiquities and the Berlin Picture Gallery. Bardini, however, always maintained a dense network of small antique dealers and second-hand dealers who incessantly supplied him with goods.

The friendship with Bode lasted 50 years and it was him who introduced Bardini into the world of the great German industrial collectors, and began buying Renaissance works of art from Bardini for the Kaiser-Friedrich-Museum in Berlin (the museum which today bears his name, Bode-Museum).

Bardini’s trade was facilitated by the absence of rigorous heritage protection laws, which only appeared in 1902 and then in 1909. The bond of trust had also been abolished, favoring the dispersion of secular collections, and then there were the Leopoldine, Napoleonic and Savoy suppressions, and finally the destruction of the center of Florence, which had caused a real flood of works of art on the market. This is where Stefano Bardini goes to find his masterpieces, and he is not limited only to Florence, his nose discovers and buys works throughout Italy.

The purchase in 1888 of the Palazzo dei Mozzi represents a further step in his profession and in the construction of his myth. In addition to transforming the main façade, where the large windows are nothing less than the sixteenth-century altars of the Cathedral of Fiesole, it also transforms the interior into a modern showroom, carefully studying the light of each environment and then assigning them to the exhibition of precise types of objects. The palace thus became a favorite destination for collectors and museum directors from all over the world. Among its wealthy buyers we cannot fail to mention Isabella Gardner of Boston, John Pierpont Morgan of New York, John Johnson of Philadelphia, the Jaquemart-André spouses of Paris, not to mention the Museums of Berlin, the Louvre, the Victoria and Albert and many other. It is calculated that only in the United States, Bardini has sold about 650/700 paintings!

In the building in Piazza dei Mozzi there were not only exhibition rooms, but also his home, offices, warehouses and the famous restoration laboratories. Even his way of exhibiting his works was decidedly new and particular, since it was not a chronological criterion, but a typological one, and then in large groups, with logical connections, with great imagination, creativity and taste, all on the famous blue background, which exalted the artworks. It was a setting that changed continuously and rapidly due to the large turnover, but despite the large costs of bricking up, removing and moving the works, the setting was always well-kept and refined.

A distinguished man of refined elegance, the merchant created the myth of himself; shy, cultured, astute and tenacious, he gave little to friendship, so much so that those who knew him called him “Stefanaccio”. He was very rigid in selecting the works to sell, never giving any space to doubt and even less to forgery. This is why he managed to gain such a prestigious clientele, and for this reason the other antique dealers were always “subdued” to him, since none of them could sell to such wealthy collectors.

Bardini brought back into vogue and enhanced the market value of works of the thirteenth and fourteenth centuries, at that time absolutely not popular, as well as leathers, fabrics, coins, bronzes, and many other categories.

The arrival in 1902 of the first heritage protection law (and then in 1909), began to change the climate of the market: the golden moment had now passed and on the eve of the First World War Bardini decided to close his shop, firing all the employees, and thus devoting himself to his dream: to organize his personal museum to donate to Florence, although his last auction was in 1918 … ah, the merchants …

The story of his inheritance and his will is very complex and it was finally resolved only in 1995. But we will tell you the incredible story of the Bardini donation in the next episode!