generic posts not shown after filtering

The Third Way for Museums survival

How to double your income during pandemic

This past year was a fatal year. A year of closures or openings in fits and starts, of crises and layoffs; in short, a disaster for the state of health of art, increasingly overwhelmed by events. The bitter truth is that there is still no end in sight to the pandemic.

The average decline in visitors to European museums in 2020 compared to 2019 was 75%,  as published by the Network of European Museum Organisations (NEMO), surveying 600 museums in 48 countries.

But it is not the demand for art that declined. During the long lockdown period, it was often art that we called to comfort us. Many institutions remained “open” online, offering each public a different experience, in order to keep interest alive and active.

At this point, as the pandemic continues, museums will all need to be able to work in a structured way with this new means. As budgets are not forecast to increase, what could be the new business model?

To face the challenge that this change imposes, not only should institutions evolve, but also the general thinking should do so. It is fundamental to relaunch the very idea of ​​a museum. In fact, one of the fundamental investments should be the recruitment of trained and qualified figures and not (only) of trainees who improvise as social media managers, fundraisers, supervisory assistants, secretaries or press officers.

Moreover, and above all, it is necessary to get rid of the association museum = a closed and mouldy place, which lives in the imagination of many. It should be replaced by the concept of the new museum that intertwines with the community, and is a place of local identity where people can recognize themselves and actively participate to events, not just a place where masterpieces can be admired in a passive fashion.

But of course this involves a semi-revolution, and it certainly comes at a cost. How to deal with it?

Museums are not doing well as we have seen. For example, there was a strong controversy, followed by a petition, for the auctioning of works of art by the MET. The New York Times reported that the Met, facing a $ 150 million deficit, has contacted auction houses about potential art sales. The New York museum is not the first, but given the weight of the institution, it could definitively clear this practice, prompting other museums to follow suit, in America, but also in the rest of the world.

At MArTA in Taranto they found an alternative, new and advanced model that we really like and that has allowed them to double their turnover by offering a full virtual 3D experience of the whole collection, attracting donations, and, mostly creating a modern FabLab inside the museum, offering a variety of workshops for modern craftsmanship.

We hope that in the New (!) Italian Minister of Culture it will take a cue!

Tweet
Pope Francis in one of his first posts on Instagram seems to be idling talking about beauty. One may wonder, aren’t there more serious problems? Should he not better speak of poverty, of hunger in the world? Or is it true that we all indeed do need beauty in our lives, independently from our conditions?

We tend to agree with him! 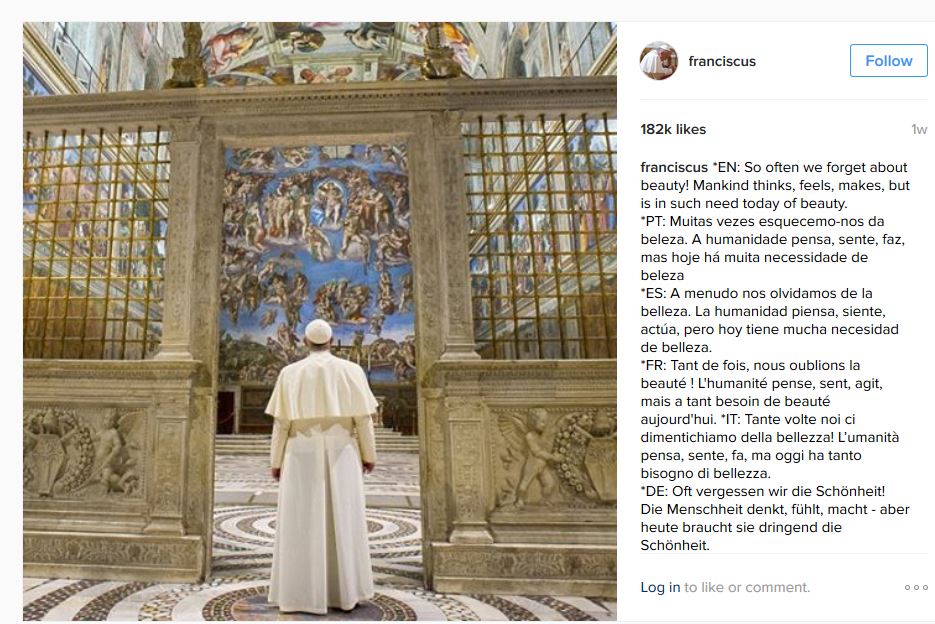 Here is the adoration of the Shepherds by Andrea di Niccolò (1470-1480), from the Conservatory of Santa Maria Maddalena in Siena and now in the Pinacoteca Nazionale. We have selected it to illustrate not only the nativity, but also our love for art and our satisfaction for discoveries which are possible through our research.
The results of scientific analyzes tell us much about the paintings :they speak, for example, of their genesis, the style and of the choices of the artist. Seeing part of the creative process allows us to ask ourselves  the right questions on who, why and when. The answers are never trivial and to learn more we don’t have much choice but to keep studying! A pleasure that we share with you .
This artwork is in fact part of “Under the gold”, the database of diagnostic images of a hundred paintings from the Pinacoteca of Siena that Art-Test Firenze has recently developed, in collaboration with the Superintendence of Siena and Grosseto. The database can be yours: here you will find more information (http://www.art-test.com/it/database-it/).

Art-Test Firenze wishes everyone Merry Christmas and a New Year full of exciting discoveries!
We thank you for the interest with which you have followed us throughout 2014!
Our offices will be closed from December 23 to January 6 . For any urgent communication please contact us by e-mail to info@art-test.com.