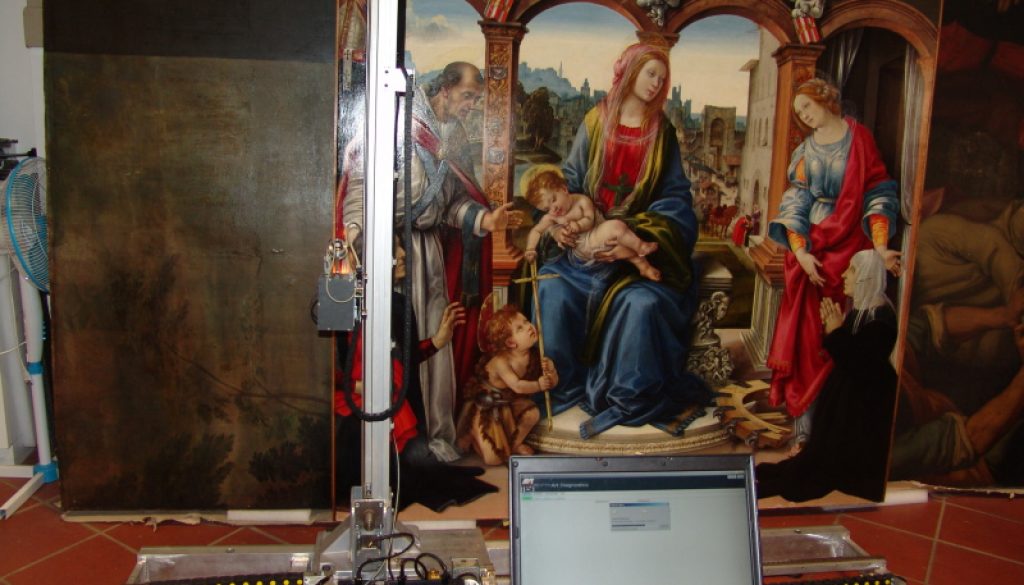 The sophistication of Filippino

The Nerli altarpiece by Filippino Lippi (1457-1504), a magnificent panel still in the original location selected for it by the client Tanai de ‘Nerli -who is portrayed in the painting together with his wife Nanna- was restored by the talented Anna Teresa Monti.

A detail of the IR Scanner reflectography of the Pala Nerli

The intervention proved to be an opportunity to rediscover, in every sense, a painting that, despite another relatively recent restoration (1990), had remained hidden under a series of varnishes and patinations.

Before evaluating whether to proceed with the removal of these, however, it was necessary to know what the conditions of the original pictorial layer were. For example, as we read in the text of A.T. Monti, in the volume: “The Nerli Altarpiece by Filippino Lippi in Santo Spirito, Studies and Restoration”, edited by D. Rapino, ed. Mandragora, “The face of the virgin, which was described by Nelson, direct witness of the last restoration, with an abrasion that creates a nuanced effect“, aroused concern. Even the comparison with the radiography, performed in 1990, did not provide comforting indications as it did not read the presence of white lead.

The non-invasive diagnostic investigations, conducted by Art–Test Firenze, helped to define the intervention in this as in other parts of the painting.

“The multispectral IR analysis was able (..) to read backgrounds and lines in the faces that hinted at the presence of original painting underneath partial and dull remakes. In addition, the Multilayer analysis revealed small cleaning blocks located in depth, in the perimeter areas, and one, larger (..) in correspondence with the lower edge of the mantle of the Santa Caterina. (..) “.

The rediscovery of the original pictorial layer, generally well preserved, has made it possible to reveal the painter’s mastery, who uses a plethora of technical devices, such as different binders, and different types of gold paint, to obtain superb effects of brightness, preciousness, but also a realistic rendering of the materials and the play of shadows and reflections.

Scanning IR reflectography also showed how the painting is the result of a complex process, visible in the preparatory drawing. The initial conception of almost all the figures differs in fact from the final realization.

As for the perspective lines, these do not converge in a single point. Some are approximately directed towards a central area of ​​the upper part of the painting, but some of these lines do not follow this trend not even waguely. A way of proceeding that is not found, for example, in the works of Botticelli, who on the contrary uses a very well studied perspective construction, while it is found in other works by Filippino, more attentive to a convincing rendering than to a scientific approach.

The painting also revealed other surprises, such as a first setting with a completely different game of looks, and some unfinished parts. We invite you to go and see it in the Basilica of Santo Spirito in Florence and to read the studies, also relating to the proposal for a new dating.

← Protecting Bologna since centuries A portrait by Caravaggio? →