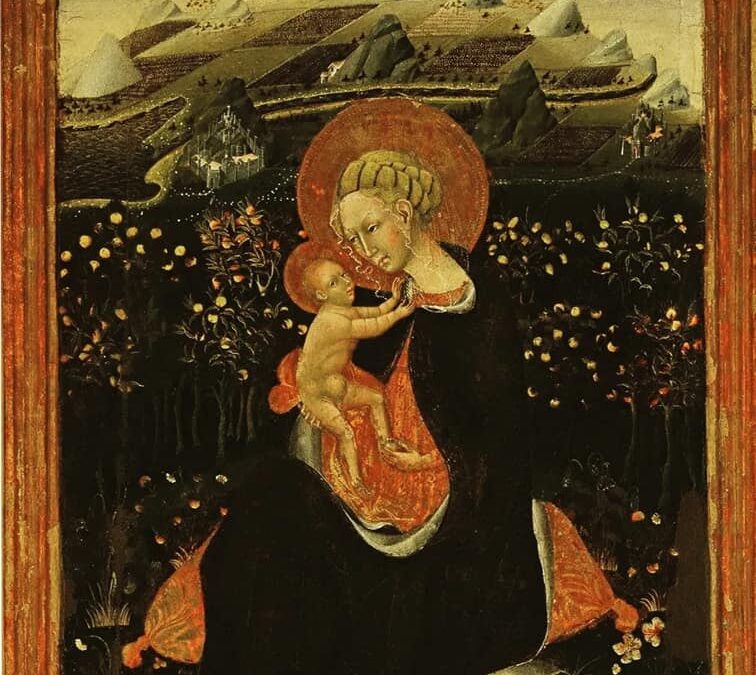 How “natural” is the countryside? How has it changed over the centuries and why? To answer these questions, paintings are also useful, as they are sort of snapshots of the past.

At the beginning of the fifteenth century, Luca del Sera, a partner of Francesco di Marco Datini, advised the great Prato merchant to “buy possessions that, at least, would run no risk of sea, factors, companions, or bankruptcies“.

Owning land, having a home (villa or castle) where to spend part of the year, became the ideal of the higher strata of city society, whether it was because they wanted to model their life on that of the nobility of ancient lineage, whether it was for the clear economic and prestige advantages that it entailed.

Land tenure could offer extensive control power over the peasants who depended on it.

Moreover, having fortresses and castles meant exercising jurisdictional rights in the countryside and therefore having areas of influence and hegemony.

In addition, of course it often meant having enough food available not only to guarantee the basic needs of the family, but also to excercise political pressure.

The fortunes of Siena were built during the twelfth century. They were related to the swamping of the Val di Chiana, following the erection of a dam (there is always a political decision behind the modification of the environment).  The old Cassia was no longer safe and went into disuse. The rare merchants, the numerous pilgrims and the occasional groups of politicians and religious travelling from North to South, and in particular to Rome, preferred to go through the Via Francigena.

Numerous hospitals, hostels and shelters were built in Siena and nearby. Mercantile activity and banks led the Sienese economy to expand brilliantly on an international level.

The arts flourished as a result.

As long as the trading and bank-based economy continued, the wealthy Sienese invested in land and agricultural activity to diversify and have a stable base.

Merchant activities were in fact continuously subjected to enormous risks. Agricultural activity is also risky, but the possession of the land gives solidity to the heritage: “Whoever has a house and a farm, can bend and not fall!” goes the saying.

When the Sienese economy bent to the plague, the competition from Florence and the lack of water that prevented the modernization of the methods of production of fabrics (which used watermills), from the mid-fourteenth century to the mid-sixteenth century, there was a real escape of capital to the countryside.

Even of smaller capital. Near Siena, for example, the average size of the single properties was not particularly large, about one and a half hectares. In the agricultural landscape the uncultivated and the wood were almost completely non-existent. While the cultivation of vines and olives was encouraged.

After the crisis and the sharp decline in the urban population of Siena, which in the fifteenth century came to be between 14 thousand and 18 thousand inhabitants, about a third of the number it housed a century earlier, the agricultural landscape changed again. Many farmed lands, thanks to human work, because of the periodic flooding of rivers and stagnant waters (especially in Maremma) returned within a few years uncultivated. The Sienese public sources denounce in the second half of the fourteenth century a very strong decline in the production of wheat and other cereals, the main source of nourishment for the population.

This led to a merger of the land units, generally rather fragmented at the beginning of the century. The fortified castles were used for the management of a certain number of farms, they were transformed into farmers residences. The ancient castle, replaced by a farm, often, however, kept its name, as evidenced for example here. One of them e.g. is the castle, now a farm, of Ama.

This landscape with castles, cultivated fields, rare trees and no woods, where the hand of man and the intensive exploitation of the countryside is clear, is what is found in the background of the painting by Giovanni di Paolo that we have analyzed.

The painter engraves on the preparation the lines of the field chessboard. Theshades of cultivations, the castles, and even the road are added afterwards, the route path was modified during the painting execution. The trees that border the road are not the cypresses we now usually see in the province of Siena. They look rather holm oak. The gold background of Byzantine painting becomes a green background. The gold of Siena has in fact become his countryside.

And we hope it can stay that way given the severe climate change we currently experience.