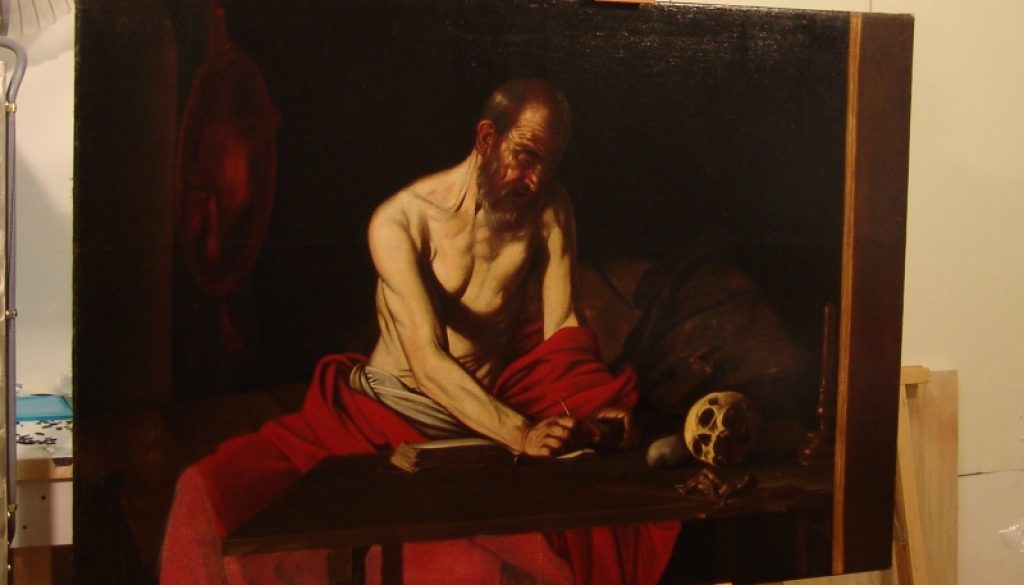 The painting, which is owned by a private collector, was originally thought to be a copy of Caravaggio’s St. Jerome Writing (composed between 1607 and 1608), which is in the Oratory of St. John’s Co-Cathedral in Valletta, Malta. Prof. Keith Sciberras of the University of Malta says that the painting does not evince Caravaggio’s “vigor” nor “his brush work” and that, during his later years, Caravaggio did not paint replicas of his own work. Maurizio Marini, who during the last forty-five years has closely analyzed many works by Caravaggio, argues that the face is too coarse to have been painted by the master.

The collector had it sent to SACI labs of Florence to have it cleaned up for an exhibit featuring it next to the original painting as part of the events marking the 400th anniversary of Caravaggio’s visit to the Mediterranean island nation in 1607-1608. Art historian Dr. Roberta Lapucci, conservation expert at SACI and a well-known expert on Caravaggio techniques, asked Art-Test to perform some diagnostic testing before restoration. The new Multilayer® technique allowed the researchers to identify and examine successive strata of paint because each layer projects a certain kind of fluorescence. It works backward, from isolating the most recent layers of paint to the oldest ones, said Anna Pelagotti of Art-Test, the private Tuscan-based institute that copyrighted it. The researchers then performed the more traditional infrared analyses, which corroborated the claim.

“With the new technique I understood it was something spectacular. “, Lapucci said. She presented her findings during an Italian TV science show (“SuperQuark” on RAI television), and said she plans to publish her findings later this year. Lapucci says the assertions that discarded the painting as a copy were made “without seeing the new test results and the painting after cleaning. Both revealed, under the heavy retouching, a much higher quality level and a very different pictorial execution, especially in the area of the face.”

In particular the painting scans from Art-Test showed several “pentimenti”, i.e. modifications made by the painter during his work, about the composition, which obviously do not show up in copies, as the reference is fixed already. “The multi-spectral analysis done in February by Art-Test convinced me that the painting is actually a preliminary sketch by Caravaggio.” She believes that Caravaggio “did a great part of this artwork: the saint is all his, as are the table top and the objects. Then Caravaggio began the official St. Jerome on another canvas (the one presently in the Co-Cathedral) with no more doubts or uncertainties.” Later on the composition was probably finished off by someone else, and then there were subsequent restorations in Malta, perhaps not performed by highly skilled restorers, which made experts think it was a contemporary copy.

The painting has been returned to Malta and plans are underway for it to be featured next year at a major museum in an exhibition focusing on the importance of scientific methodologies for art investigation.