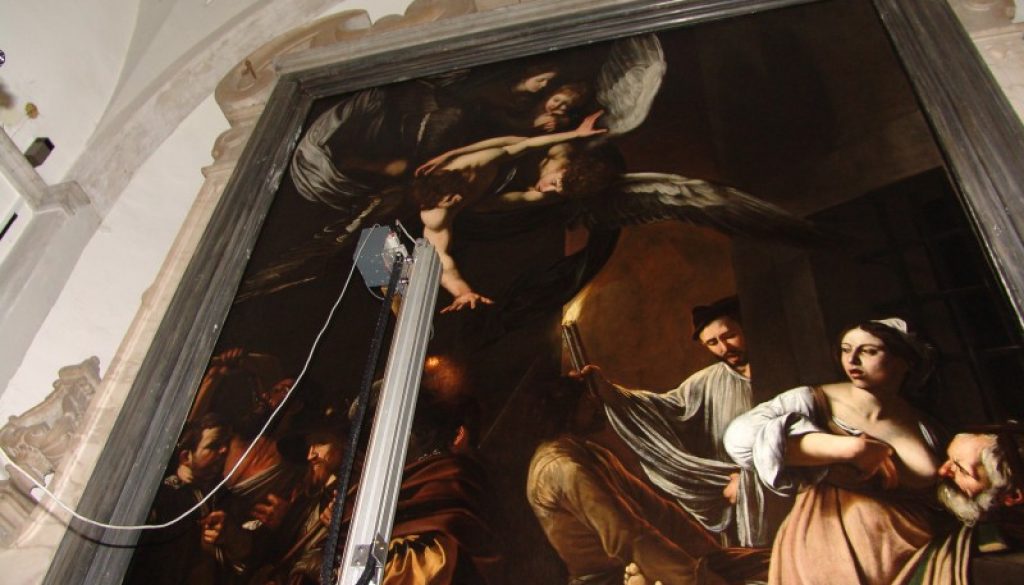 Seven Acts of Mercy by Caravaggio: a superb experience

Caravaggio escapes from Rome on 28 May, with the accusation of having killed Ranuccio Tommasoni and arrives on 6 October 1606 in Naples, where he immediately receives prestigious commissions, including the painting depicting the “Seven Works of Mercy” for the church of the then new brotherhood of the Pio Monte della Misericordia, where it is still located and where the payment warrant is still kept, indicating that the painter would have been entitled to 370 ducats of the 400 total agreed.

The painter created in a very short time (between the end of that same year and the beginning of 1607) a work that was so appreciated that Monte was forced to prohibit its transfer and sale at any price and to authorize copying only to a few. artists. The large painting will be moved temporarily from its original location only five times in total, both for conservation and restoration reasons and for exhibitions.

The Congregation of Pio Monte was born in 1602 as a secular institution at the behest of seven Neapolitan nobles, including Luigi Carafa-Corona, a member of the patron family of Caravaggio, who were dedicated to charitable works. In 1604, construction began in the chapel of the brotherhood and Caravaggio’s revolutionary style seemed ideal for expressing his great ambitions. It is in fact the first work commissioned for the decoration of the church.

The Seven Acts of Mercy represent the charitable activities of the brotherhood which was mainly aimed at caring for and satisfying the physical needs of the poor: the acts of Christian charity were the means to redeem one’s sins.

The composition is grandiose and theatrically complex: at the top the light outlines the figure of a Madonna and Child supported by flying angels; Maria observes benevolently the figures below which, organized in a complex interlocking, allude to the acts of mercy. Two floors merge into a single space that encloses the human and the divine, creating a scene of great realism and drama.

On the right side of the composition the precepts “to feed the hungry” and “visit the prisoners” are gathered in the figure of Cimon who is suckled by his daughter Pero. Behind him, behind the prison wall, a man appears carrying a corpse, of which only the feet are visible, followed by a priest in a white tunic holding a torch to represent “burying the dead” (a work absent in the Gospel di Matteo, but added to the list during the plagues in the Middle Ages and which constituted a public health problem addressed with great concern by Pio Monte).

The scene on the left is occupied in the foreground by an elegant knight with a plumed headdress, Saint Martin, who divides his cloak to give it to a poor man and treats a cripple to allude to “dressing the naked” and “visiting the sick”. Further back is depicted St. James welcomed by the man who stands in front of him who represents “hosting pilgrims”, while Samson, a hero of the Old Testament, drinks from the donkey’s jaw which indicates “to give drink to the thirsty”.

The work represents a cornerstone for the painting of Southern Italy and for Italian painting in general: the Seven Acts of Mercy are in fact depicted in a single bold composition with a powerful emotional impact, with strong contrasts of lights and shadows and an unprecedented excited rhythm.

Caravaggio develops in Naples the stylistic innovations with which he has already caused a stir on the Roman scene. The sacred theme takes on the realistic appearance of the faces of the inhabitants of the alleys of Naples and with equal realism the profiles of things are outlined, from weapons to clothes, from the wings of angels to the flow of water.

The composition appears as divided into two parts thanks to the intense contrasts of brightness: the light and white tones illuminate the right part, directly striking the bodies of the angels and their wings and highlighting the figures of Pero and the priest, while the chiaroscuro and the penumbra envelop the left side. Dark brown is the dominant tone in the architecture and shadows on the left. Ochre, green and grey-green are the colours that most characterize the clothes.

The strong realism and the clear and direct vision of the subjects made thanks to the daring use of light will represent an important point of reference for local painters and will mark the transition from a devout and late-mannerist painting to what will be the season of naturalism in the Naples of the seventeenth century.

Art-Test had the pleasure and honour of carrying out a diagnostic campaign of the work as part of the initiatives promoted by the “National Committee for the celebrations of the IV centenary of the death of Michelangelo Merisi da Caravaggio (1571-1610)” established by Ministry of Cultural Heritage and Activities with the aim of studying in more depth and in a scientific manner, the artist’s extraordinary pictorial production

Art-Test brought its instrumentation inside the Church of Pio Monte and it was necessary to design a particular scaffolding that was stable and that would allow the Scanner to be brought closer to the canvas and the execution of the Multispectral investigation (IR / UV) at night since it is not otherwise possible to adequately darken the place.

A small sacrifice that was definitely worth it. Staying in contact with the genius of Caravaggio and the possibility of exploring his technique from very close are experiences that have no equal.

← Ligozzi: wonders of an expanding world Vasari in Bosco Marengo →