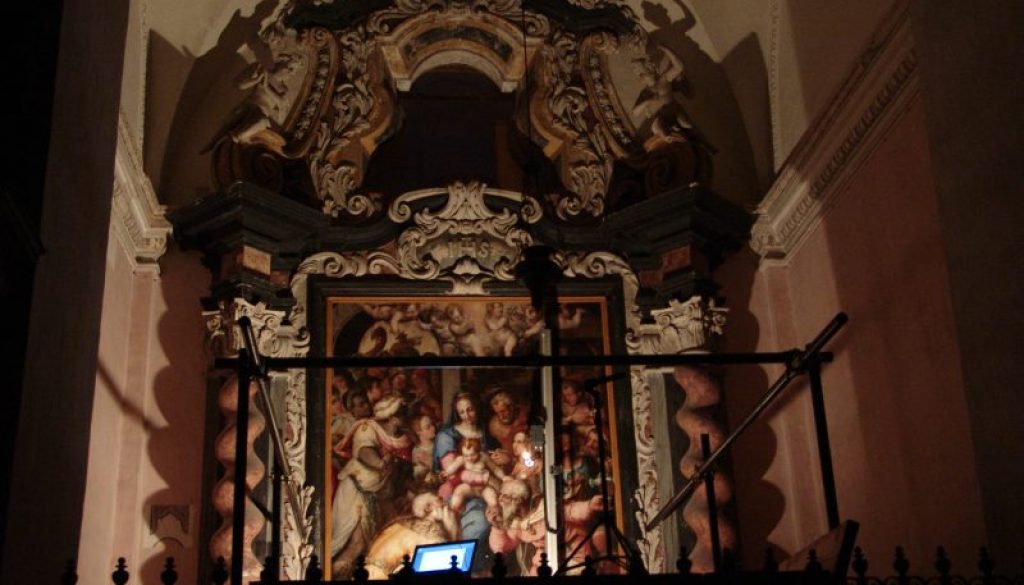 In the mid-sixteenth century, when he was still a cardinal, the future Pope Pius V decided to found a Dominican convent in his native town, Bosco Marengo, a small town near Alessandria, hitherto poor and absolutely unknown.

Not only that, a few months after his ascent to the papal throne, in the summer of 1566, he entrusted Giorgio Vasari, an artist at the height of his success and active for many years in Florence, with the task of painting a large “pala” for the church of a convent that was still under construction, but which one day should have received his remains. To understand the ambition of this project, consider that for the main altar, the pope asked that what Vasari describes in his autobiography as “… a very large machina almost like a triumphal arch, with two large panels, one in front and one behind, and in smaller pieces about thirty stories full of many figures which are all carried out in a very good way ”. According to the preparatory drawing, the altar was to have a gilded wooden structure in the fashion of sixteenth-century carpentry, unfortunately dismembered in 1710 when, in honor of the canonization of Pius V, a new high altar in marble was erected (still present today). However, a good number of the paintings that were part of it, including the main work the “Last Judgment”, are still preserved in the church of Santa Croce. 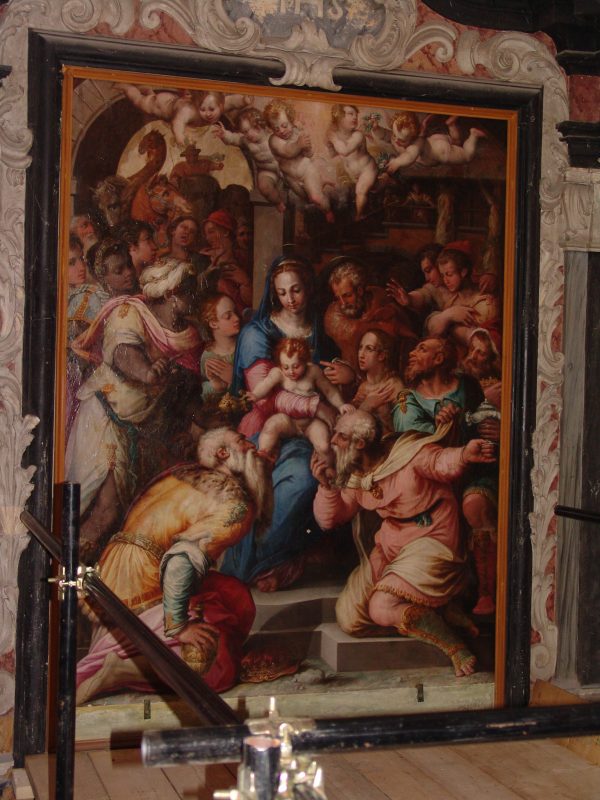 Art-Test Firenze had the pleasure of carrying out an articulated diagnostic campaign on two of the panel paintings in the church of Santa Croce: the one depicting the “Adoration of the Magi” and the one depicting the martyrdom of St. Peter the Martyr. The investigations, with the exception of the chemical ones on micro-sampling, were of a non-invasive optical type: IR scanning reflectography, Multilayer (Art-Test patent), multispectral UV fluorescence, multispectral color and IR, thermography, digital radiography, fluorescence X-ray, 3D survey, FTIR and stratigraphic analysis. The synergy between the different analyzes made it possible to collect those data and information that the direct vision of the work does not give, but which are crucial in the design and then execution of a well-organized restoration intervention.

The “Adoration of the Magi” (1566-67) was the first work commissioned for Bosco Marengo with which Pius V probably wanted to test the painter’s skills. On 25 January 1567 the panel was finished and in the following February it was sent to Rome so that the Pope could see it before it was sent to the church of Santa Croce. It is a complex composition, crowded with characters drawn from a rich repertoire, characterized by rich ornaments, elaborate drapery and refined luministic and chromatic effects, a true expression of the artist’s virtuosity. The central pivot of the scene are the Madonna and Child in the foreground with the kneeling Magi. The work was in rather problematic conservation conditions, such as the great deterioration of the pictorial film, probably due to humidity. From the analyzes emerged the numerous repaintings of the restoration interventions to which it was subjected as early as the eighteenth century. A micro-sampling was made necessary, an invasive examination but crucial to know the preparation and study its composition. 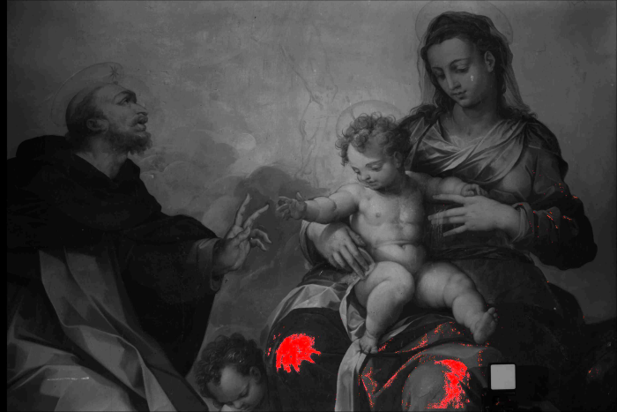 Identification of the Smalt Pigment obtained via multispectral imaging analyses, overlaid on the Infrared refelctography image

The support was analyzed also under grazing light, while FTIR was used to understand the board preparation, which was based on gypsum and animal glue. Thanks to the infrared scanning with InGaAs sensor, which involved the area of the Holy Family and the Magi, it was possible to detect an underlying drawing made with multiple means and in different parts depending on the degree of progress of the work. Localisation of the areas where the Smalt pigment was used, detected via Multispectral imaging

On the whole, important variations of the painted subject are not identified, but small rethinking of postures and some repentances. The whole work seems to have been completed with great confidence and without the use of cartoons, which suggests the action of the hand of a single master. There have been many pictorial reintegrations over the years for which the palette used was studied with XRF: 20 XRF points and subjected to infrared and false color imaging. 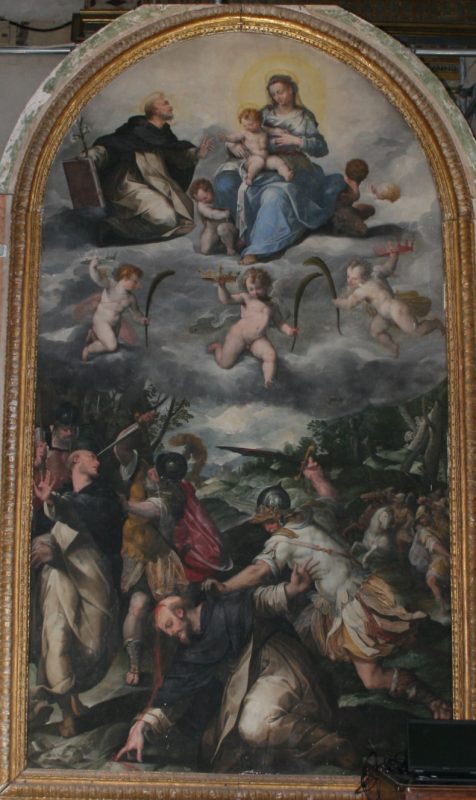 The work depicting the “Martyrdom of St. Peter Martyr” was intended for the rear part of the main altar of the “machine” made by Vasari, to which the painter’s workshop also contributed, for example, the presence of Jacopo Zucchi is almost certain. Some panels of the predella are attributed to him. The episode of the ambush of the Dominican saint occupies the lower part of the scene with a background rich in elements of Nordic derivation. The choice of the episode is not accidental: the figure of Pietro da Verona, who joined the Dominicans in 1221, who was appointed inquisitor for northern Italy by Gregory IX and who fought the heresy of the Cathars, marries the conception Dominican religious of the period of the Counter-Reformation during which Pius V became the supreme Inquisitor of the Church and formed a Holy League with Spain and Venice.

The table retains the sixteenth-century carved and gilded frame with a curved shape. Also on this work, the diagnostic campaign developed on several fronts: the RX investigation for the study of the support, the grazing light for the pictorial film, the FTIR for the preparation and the XRF for the pigments

The writer Vasari talks about his executive technique in his “Memories” and it is known that in the same years in central Italy a certain technical experimentation on binders by artists was widespread and in this case it was the cross sectional analysis in UV light and FTIR to confirm the mixed technique. Underneath the pictorial film, traces of a preparatory drawing emerged but not a the use a cartoon, which suggests a freehand execution. The reflectographic investigation documents the traces of some relevant pentimenti and other minor variations carried out in the course of work with different tools (such as the graphite tip and the brush), elements that suggest the presence of the master during the corrections but also of a valid collaborator in Vasari’s atelier. Martyrdom of St. Peter Martyr, Giorgio Vasari, Bosco Marengo during investigations

The X-ray revealed that the work was “plastered” in same places and that minor repairs were carried out on the support.

In general, however, the extreme technical skill of Vasari’s workshop is confirmed, whose works resist almost unchanged over the centuries.

Results of the analyses have been published in several scientific articles and in : Vasari a Bosco Marengo. Studi per il Restauro delle Tavole Vasariane in Santa Croce, edito da SAGEP

The video of the 3D relief of the “Adoration of the Shepards”, is visible on our  YouTube channel.

← Seven Acts of Mercy by Caravaggio: a superb experience Under disguise →