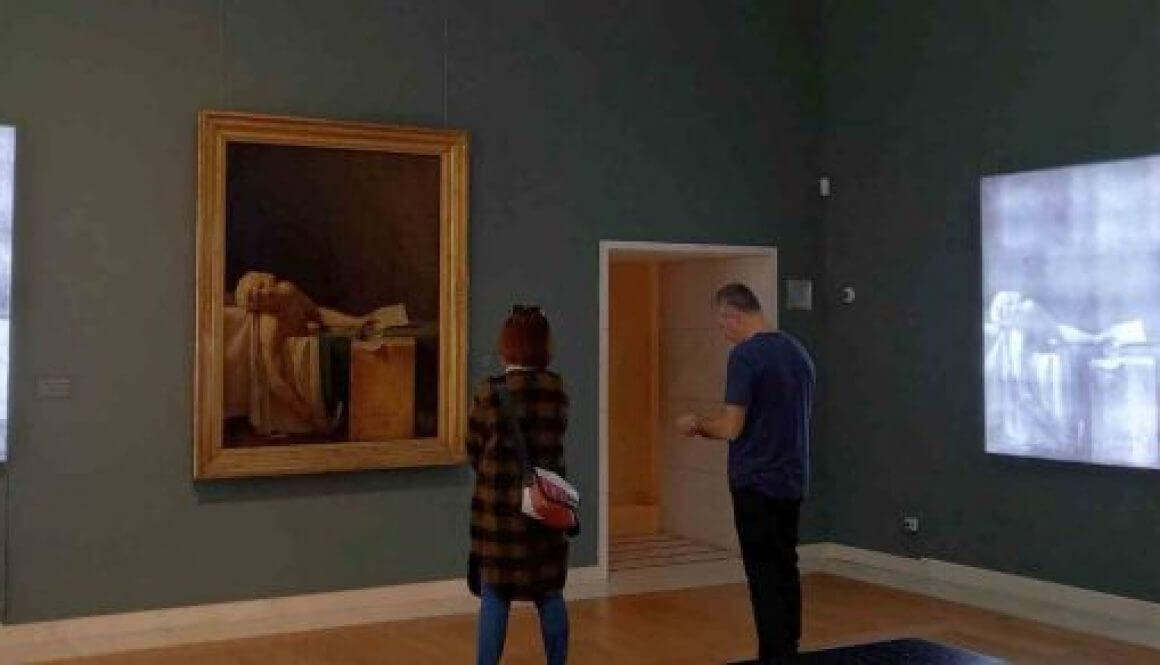 In these times of war, the Royal Museum of Fine Arts in Brussels dedicates an exhibition to David‘s canvas which stages the murder of Jean Paul Marat in 1793,  painted just a few months after the crime. It is a political work, commissioned by the revolutionary command, as a tribute to the martyrs of the French Revolution.

With this image David intended  to contribute to the sanctification of an activist who is represented here as if he were a Christ – inspired by the compositions of Michelangelo, Raphael, Caravaggio -, who, to keep faith with his ideals, chooses to sacrifice his own life. In reality it did not happen quite like that.

Marat was murdered by a young woman, Charlotte Corday, at his home while he was immersed in a bathtub.

Jean Paul Marat, son of a former Sardinian friar by the surname Mara, then Frenchized in Marat, was in fact suffering from a dermatological disease that forced him, in an attempt to alleviate the symptoms, to stay immersed in almond milk for most of his days. After a rather unsuccessful career as a doctor and scientist, he became very popular as a politician and journalist. From the columns of “The friend of the people” he urged his contemporaries with extremely violent tones, not to stop after the first phase of the revolution, but to continue to get rid, with bloody methods, not only of the exponents of the monarchy, but also of  more moderate revolutionaries.

Exasperated by the ensuing massacres, Charlotte believed she could put an end to this by taking Marat’s life. She paid for this by being guillotined, and she didn’t even succeed in the intent: the phase of Terror, with mass purges and tens of thousands of deaths, actually intensified, until Robespierre’s dismissal.

The “Death of Marat” is the only painting linked to David’s revolutionary propaganda that remains. His counterpart, the “Death of Lepeletier“, was destroyed, it is believed, during the coup of 1794 and the “Death of Bara” was never completed.

The “Death of Marat” came to us only because David managed to hide it. But how? To understand how this happened, diagnostic tests were used.

Although there are libraries full of books that analyze this painting from a stylistic and political point of view, it was rightly, and finally, considered appropriate to study the work also with an in-depth diagnostic campaign, through the FACE TO FACE project, which included physico-chemical analyzes and digital imaging.

In this way it was possible to understand what the author thought, how he adapted and arranged the elements of the composition;one can follow his thoughts while he drew and painted and even after, while he wanted to hide the painting during his exile in Brussels. Here, in fact, he had found asylum and for this reason he bequeathed to this city what is undoubtedly one of his most famous artworks.

The diagnostic study was then also repeated on a series of versions and replicas both by the atelier and by other copyists, starting with the Louvre replica, to understand if there had been preparatory paintings and in general what were the relationships between the various artworks. 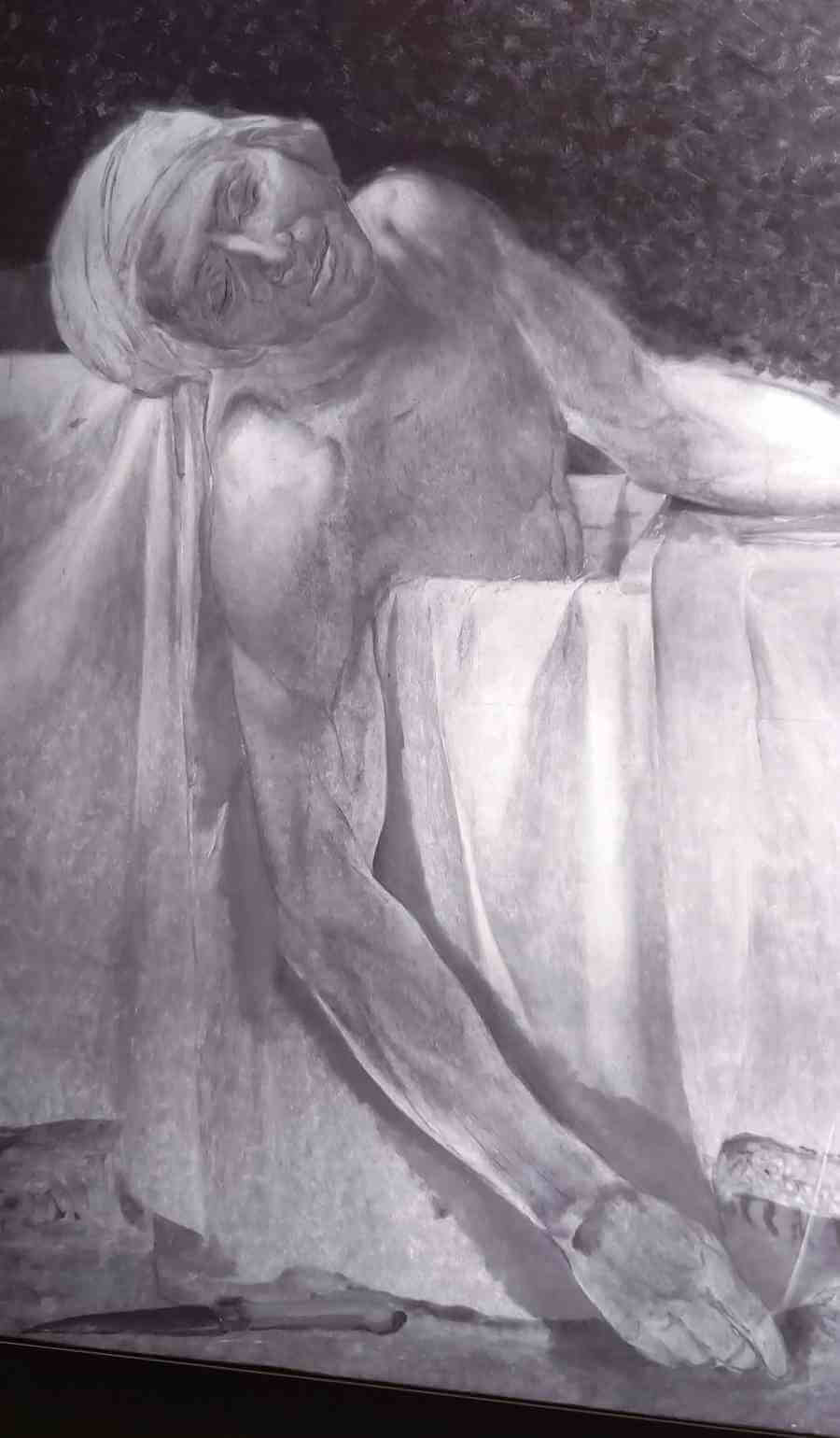 Infrared reflectography was undoubtedly among the most revealing investigations.  Here we see how Marat’s face is a combination of David’s drawing of his friend on his deathbed (now at the Louvre) and his death mask. The face with respect to the drawing has been rotated 100 degrees, and this has led to changes in the shadows. The volume of the turban has also been increased to make it plausible that the head was resting on something, and the facial dysmorphism from which Marat suffered, was removed, while this it is evident in the preparatory drawing visible in IR.

Another interesting detail that emerges from the reflectography and the X-ray is that Marat probably initially held a crumpled piece of paper in his right hand and not a pen, which was instead provided in his left hand (although we do not know that he was left-handed). These changes are explained with the intention of giving more strength to the political message. 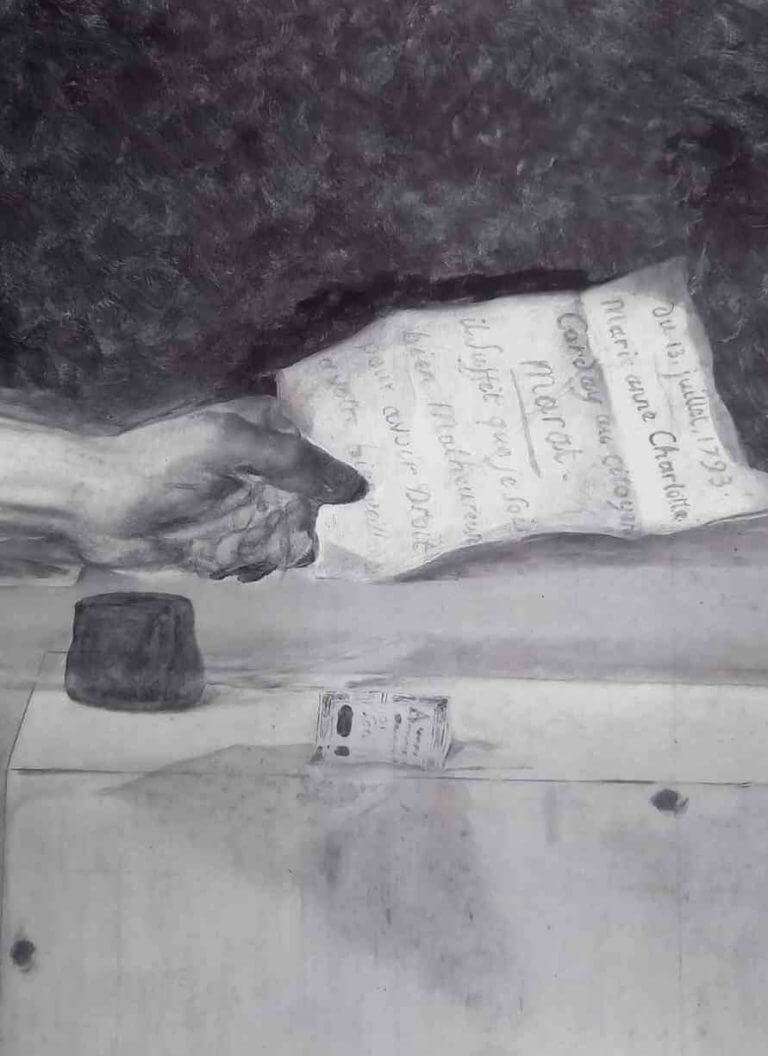 In the following years, however, the political scenario changes and David had to quickly retire into exile.

Some authors had argued that, in an attempt to protect his works from destruction, David hid the painting by painting it white. However, upon analyzing the surface under the microscope, it was seen that this was not the case, in fact there are no residues of white paint anywhere, while it was discovered the presence of fibers on the entire surface of the painting, from which another hypothesis arises: that David, to hide it, fixed the canvas on the inner edges of the frame (as confirmed by the presence of many holes on the four sides of the canvas), then cut the excess of the canvas that reached the back and then mounted a new canvas on the frame. In this way the painting remained for a long time hidden behind a white canvas, which appeared ready to be used, in Antonie Gros’ studio.

The truth about the hiding of the canvas has therefore emerged. The judgment on Marat and on the revolutions will always be questionable.

← A table becomes a Cross Russian fakes, anyone? →