The shape of water. How do we date paper? 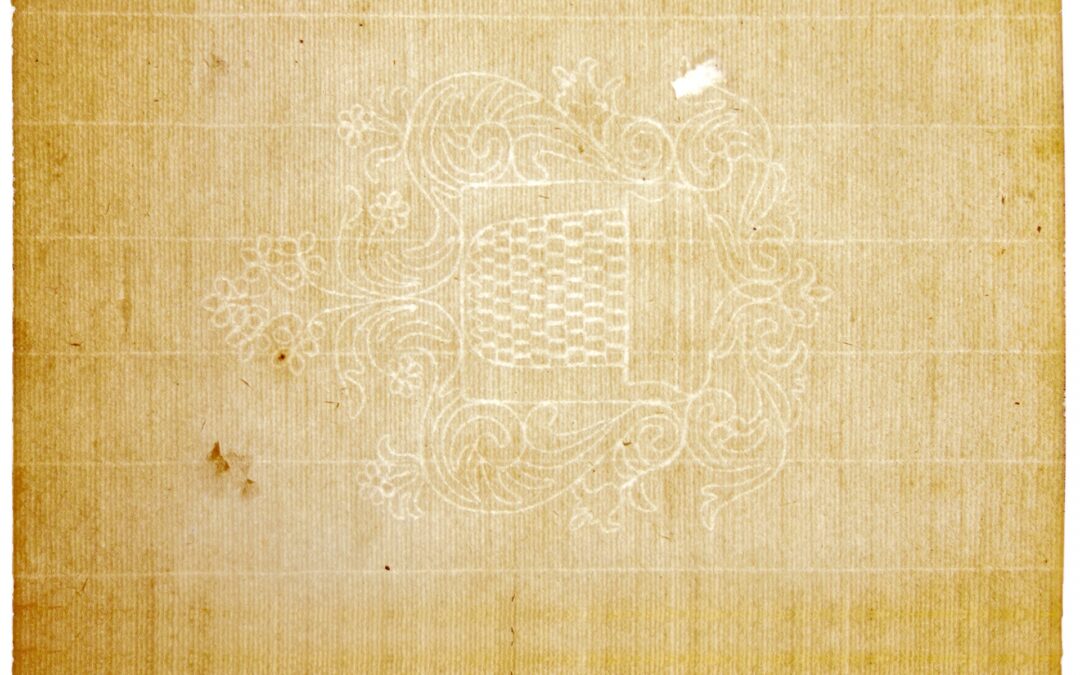 Paper has played a very important role in all cultures, ever since it was “invented”, because it is not just a support, but it has been (and continues to be) the greatest multiplier of culture and history. Each “sheet” brings with it technological history and revolution.

It all started in the Far East , where the production process was a state secret for centuries. It was tthen “transported” by the Arabs to North Africa, and from here it reached Spain, passing through Fez, and then conquered Europe .

Watermarked paper began to spread in Europe from the 14th century and totally supplanted the much more expensive parchment in the following century.

But how do we date paper? The first answer, since paper is an organic material, could be by using the carbon 14 dating method. However, this implies not only a taking a sample of about 1 cmq but also receiving an answer that is not always correct. Unfortunately, paper, and in general all organic materials, are porous, thus they collect dirt and various inclusions such as primers or materials used for restoration which, if not properly removed, can invalidate the result of the analysis.

But paper has a huge advantage over other organic media: sometimes it declares its age by itself. Observing the sheets in transillumination can actually give the pleasant surprise of finding the watermark. In reality, even the mere presence or absence of strands and wire rods, i.e. the vertical and horizontal lines visible in transparency, gives useful information for the study.

If we find the watermark we are in front of the “talking” part of the sheet, the shape that the water has imprinted.

These are signs in the form of animals or coats of arms, compositions including letters, even more than one.

But how can we date the paper starting from its “watermark”?

In Europe since the 13th century, watermarks have been printed on paper as a certification of origin or quality . In this way they identify the center and the production workshop.

The importance of using the watermark was already well known in the Middle Ages, in fact we read in the treatise by Bartolo da Sassoferrato, “Tractus de insignis et armis”: as you can see, each sheet of paper has its own sign, from which you can recognize which workshop the paper comes from. So I say that in this case the sign belongs to the person who occupies the building where the paper is produced, whether it is his property or rented it , whether it is dealt with in any capacity, whether in part or in its entirety, or whether it is dealt with illegally. During the entire time in which it is in the possession of the workshop, it cannot be prohibited from making use of that sign.

In addition, Bartolo di Sassoferrato also emphasizes another aspect, namely how the “brands” of artisans is meant to represent the quality of their product in relation to their experience and to the natural characteristics of the place. For example, the importance of the quality of the water in Fabriano, which pure and low in limestone for the production of famous paper.

In short, what was the production brand today becomes for us a fundamental element for the dating of the paper support. This scientific value was initially intuited by C.M.Briquet and G. PIccard who with their studies attested the usefulness of watermarks for dating handwritten or printed texts.
Comparison and recognition of identical watermarks allow us to date the support with a margin of error of a few years.

The repertories of watermarks collected by the two scholars were then merged with other collections covering a considerable part of medieval watermarks.

Over the years, Art-Test has repeatedly used the study and recognition of watermarks as a dating method for paper. The non-invasive approach of this study is fundamental, as it is more respectful of the artifact: a destructive investigation would require, in this case, a sample of considerable size / weight, if compared to the orders of magnitude of the artifacts. It is also substantially cheaper.